LADAKH, A PEARL IN THE HIMALAYA 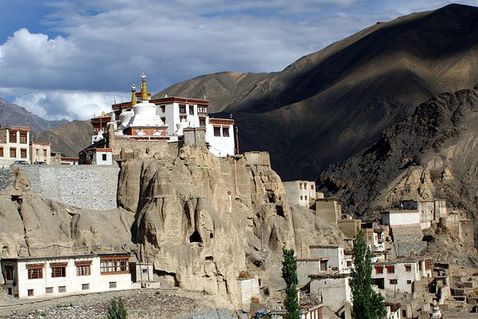 Ladakh ("land of high passes") is a region in the Indian state of Jammu and Kashmir that currently extends from the Kunlun mountain range to the main Great Himalayas to the south, inhabited by people of Indo-Aryan and Tibetan descent. It is one of the most sparsely populated regions in Jammu and Kashmir and its culture and history are closely related to that of Tibet. Ladakh is renowned for its remote mountain beauty and culture.

The Tibetan name La-dvags means "land of high passes"; it connected India with the Silk Road. Ladakh is its pronunciation in several Tibetan districts, and a transliteration of the Persian spelling.
​
Historically, the region included the Baltistan (Baltiyul) valleys (now mostly in Pakistan), the entire upper Indus Valley, the remote Zanskar, Lahaul and Spiti to the south, much of Ngari including the Rudok region and Guge in the east, Aksai Chin in the northeast (extending to the Kun Lun Mountains), and the Nubra Valley to the north over Khardong La in the Ladakh Range. Contemporary Ladakh borders Tibet to the east, the Lahaul and Spiti regions to the south, the Vale of Kashmir, Jammu and Baltiyul regions to the west, and the southwest corner of Xinjiang across the Karakoram Pass in the far north. 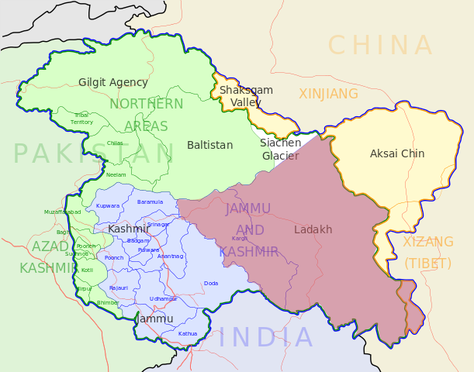 Aksai Chin is one of the disputed border areas between China and India. It is administered by China as part of Hotan County but is also claimed by India as a part of the Ladakh region of the state of Jammu and Kashmir. In 1962, China and India fought a brief war over Aksai Chin and Arunachal Pradesh, but in 1993 and 1996 the two countries signed agreements to respect the Line of Actual Control.
​
In the past Ladakh gained importance from its strategic location at the crossroads of important trade routes, but since the Chinese authorities closed the borders with Tibet and Central Asia in the 1960s, international trade has dwindled except for tourism. Since 1974, the Government of India has successfully encouraged tourism in Ladakh. Since Ladakh is a part of strategically important Jammu and Kashmir, the Indian military maintains a strong presence in the region.
​The largest town in Ladakh is Leh, followed by Kargil. 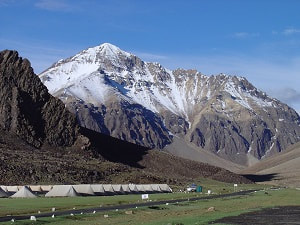 Ladakh is the highest plateau in the state of Jammu & Kashmir with much of it being over 3,000 m (9,800 ft). It extends from the Himalayan to the Kunlun Ranges and includes the upper Indus River valley.
Contemporary Ladakh borders Tibet to the east, the Lahaul and Spiti regions to the south, the Vale of Kashmir, Jammu and Baltiyul regions to the west, and the southwest corner of Xinjiangacross the Karakoram Pass in the far north. Before partition, Baltistan, now under Pakistani control, was a district in Ladakh. Skardo was the winter capital of Ladakh while Leh was the summer capital.
Kargil is the second most important town in Ladakh. It was an important staging post on the routes of the trade caravans before 1947, being more or less equidistant, at about 230 kilometres from Srinagar, Leh, Skardu and Padum. 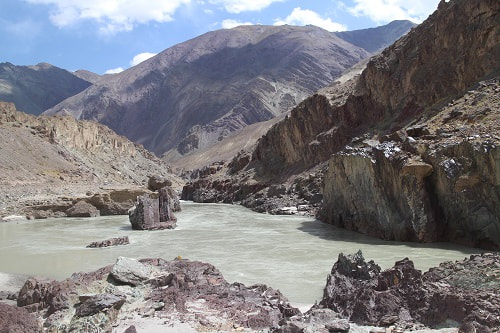 The Indus River is the backbone of Ladakh. Most major historical and current towns — Shey, Leh, Basgo and Tingmosgang (but not Kargil), are close to the Indus River. After the Indo-Pakistani War of 1947, the stretch of the Indus flowing through Ladakh became the only part of this river, which is greatly venerated in the Hindu religion and culture, that still flows through India.

The Siachen Glacier is in the eastern Karakoram Range in the Himalaya Mountains along the disputed India-Pakistan border. The Karakoram Range forms a great watershed that separates China from the Indian subcontinent and is sometimes called the "Third Pole." At 76 km long, it is the longest glacier in the Karakoram and second-longest in the world's non-polar areas. It falls from an altitude of 5,753 m (18,875 ft) above sea level at its source at Indira Col on the China border down to 3,620 m (11,880 ft) at its snout.

Ladakh is a high altitude desert as the Himalayas create a rain shadow, generally denying entry to monsoon clouds. The main source of water is the winter snowfall on the mountains. The regions on the north flank of the Himalayas — Dras, the Suru valley and Zangskar — experience heavy snowfall and remain cut off from the rest of the region for several months in the year, as the whole region remains cut off by road from the rest of the country. Summers are short, though they are long enough to grow crops. The summer weather is dry and pleasant. Temperature ranges are from 3 to 35 °C in summer and minimums range from -20 to -35 °C in winter. Zanskar is the main river of the region along with its tributaries. The Zanskar gets frozen during winter and the famous Chadar trek takes place on this magnificent frozen river. 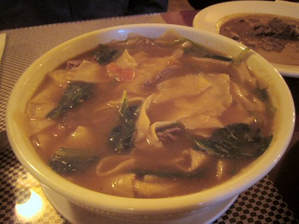 Ladakhi food has much in common with Tibetan food, the most prominent foods being thukpa (noodle soup) and tsampa, known in Ladakhi as ngampe (roasted barley flour). Edible without cooking, tsampa makes useful trekking food. A dish that is strictly Ladakhi is skyu, a heavy pasta dish with root vegetables. As Ladakh moves toward a cash-based economy, foods from the plains of India are becoming more common.
​
​As in other parts of Central Asia, tea in Ladakh is traditionally made with strong green tea, butter, and salt. It is mixed in a large churn and known as gurgur cha, after the sound it makes when mixed. Sweet tea (cha ngarmo) is common now, made in the Indian style with milk and sugar. Most of the surplus barley that is produced is fermented into chang, an alcoholic beverage drunk especially on festive occasions. 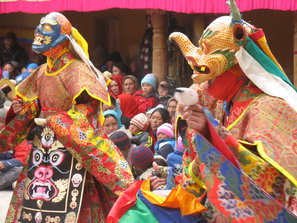 Traditional music includes the instruments surna and daman (shenai and drum). The music of Ladakhi Buddhist monastic festivals, like Tibetan music, often involves religious chanting in Tibetan as an integral part of the religion. These chants are complex, often recitations of sacred texts or in celebration of various festivals. Yang chanting, performed without metrical timing, is accompanied by resonant drums and low, sustained syllables.
​
​Religious mask dances are an important part of Ladakh's cultural life. Hemis monastery, a leading centre of the Drukpa tradition of Buddhism, holds an annual masked dance festival, as do all major Ladakhi monasteries. The dances typically narrate a story of the fight between good and evil, ending with the eventual victory of the former. Weaving is an important part of traditional life in eastern Ladakh. Both women and men weave, on different looms. Typical costumes include gonchas of velvet, elaborately embroidered waistcoats and boots and hats.

​The most popular sport in Ladakh is ice hockey, which is played only on natural ice generally mid-December through mid-February. Cricket is also very popular. Archery is a traditional sport in Ladakh, and many villages hold archery festivals, which are as much about traditional dancing, drinking and gambling, as they are about the sport. The sport is conducted with strict etiquette, to the accompaniment of the music of surna and daman (shehnai and drum). Polo, the other traditional sport of Ladakh, is indigenous to Baltistan and Gilgit and today is an annual affair in Drass region of District Kargil.

A feature of Ladakhi society that distinguishes it from the rest of the state is the high status and relative emancipation enjoyed by women compared to other rural parts of India. The society is also both maternal and paternal, the tradition of where the groom comes to stay with the bride's family is not considered a taboo unlike the rest of India. Women enjoy a very high status in society, however, female participation in the politics of the region remains limited.

​Tibetan medicine has been the traditional health system of Ladakh for over a thousand years. This school of traditional healing contains elements of Ayurveda and Chinese medicine, combined with the philosophy and cosmology of Tibetan Buddhism. For centuries, the only medical system accessible to the people have been the amchi — traditional doctors following the Tibetan medical tradition. Amchi medicine is an important component of public health to this day, especially in remote areas. 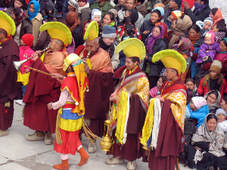 ​Ladakh celebrates many famous festivals. One of the biggest and most popular is the Hemis festival. It is celebrated in June to commemorate the birth of Guru Padmasambhava.
In September, the Jammu and Kashmir Tourism Department with the help of local authorities organize the Ladakh Festival.
​The Government of Jammu and Kashmir organizes the Sindhu Darshan festival at Leh in May–June. It is celebrated on the full moon day (Guru Poornima).
Source: Wikipedia.org, 31/03/2018, text is available under the Creative Commons Attribution-ShareAlike License